I’m seriously considering that I’m talking to myself, but decided to move forward with another blog post anyway.

Okay, I’ll answer. I think plein air was started in the 1800’s because, at that time, the art world was consumed by protocol and rules of how art should be done. So much so, that art was just a matter of following the rules—nothing was left to discussion. The subject matter was to teach a lesson or exemplify a moral value, light was handled by doing X, Y, and Z, color was prescribed by chiaroscuro formulas or approaches, etc. etc. In short, being an artist was more about being good at following the rules and had not much at all to do with the artist’s own relationship with the subject, their emotional reaction to the subject, or event personal vision of the subject. Impressionism changed all that. In fact, they so much went against the grain of approved and prescribed art at that time, that they were absolutely rejected and ridiculed by the establishment, the officially sanctioned art of the Académie des Beaux-Arts. 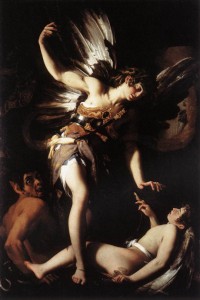 Example of chiaroscuro approved by the Salon 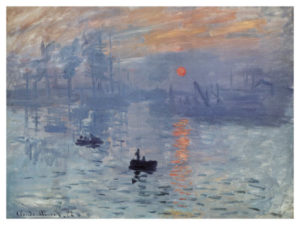 The namesake of impressionism, “Impression Sunrise” by Claude Monet

Plein air was an attempt to establish or re-establish that immediacy with the subject that had been lost with all the rules of the Academy– and also give the artist a voice in reacting to it on a personal and immediate level. What better way to react to the nuances of nature than to be right in the middle of it and literally “be in the moment?”

And I think that the appeal of a personal and immediate response to a subject carries just as much punch now as it ever did. It’s invigorating, refreshing, and totally personal—just as stimulating now as ever—even though now it is mainstream and doesn’t carry the extra fun of rebelling against the establishment. (too bad)

Actually, and here’s the twist in the plot you’ve all been waiting for, if anything, it IS the establishment now. Kind of ironic! These brief suggestions of form and space have become a mainstream way of depicting landscapes. So much so that most art galleries are filled with mostly or nothing but plein air paintings. Now not all of them have been completely done outdoors, but they carry the signature qualities of immediacy in air and light and use abbreviated form—suggested form instead of endless details.

WEEK TWO FORUM: If you don’t do plein air, it may be hard to get accepted as a landscape artist. At least, you could say it puts you in the minority or at a disadvantage. Agree or disagree?